Skip to content
Current Specials | Cocktails | Liquors | Blue Moon Sushi Bar Specials
Welcome to the Lucky Sevens Casino Bar Menu! All of our drinks are always just 1000 gil, but tips to your lovely bartenders and servers are always welcomed. 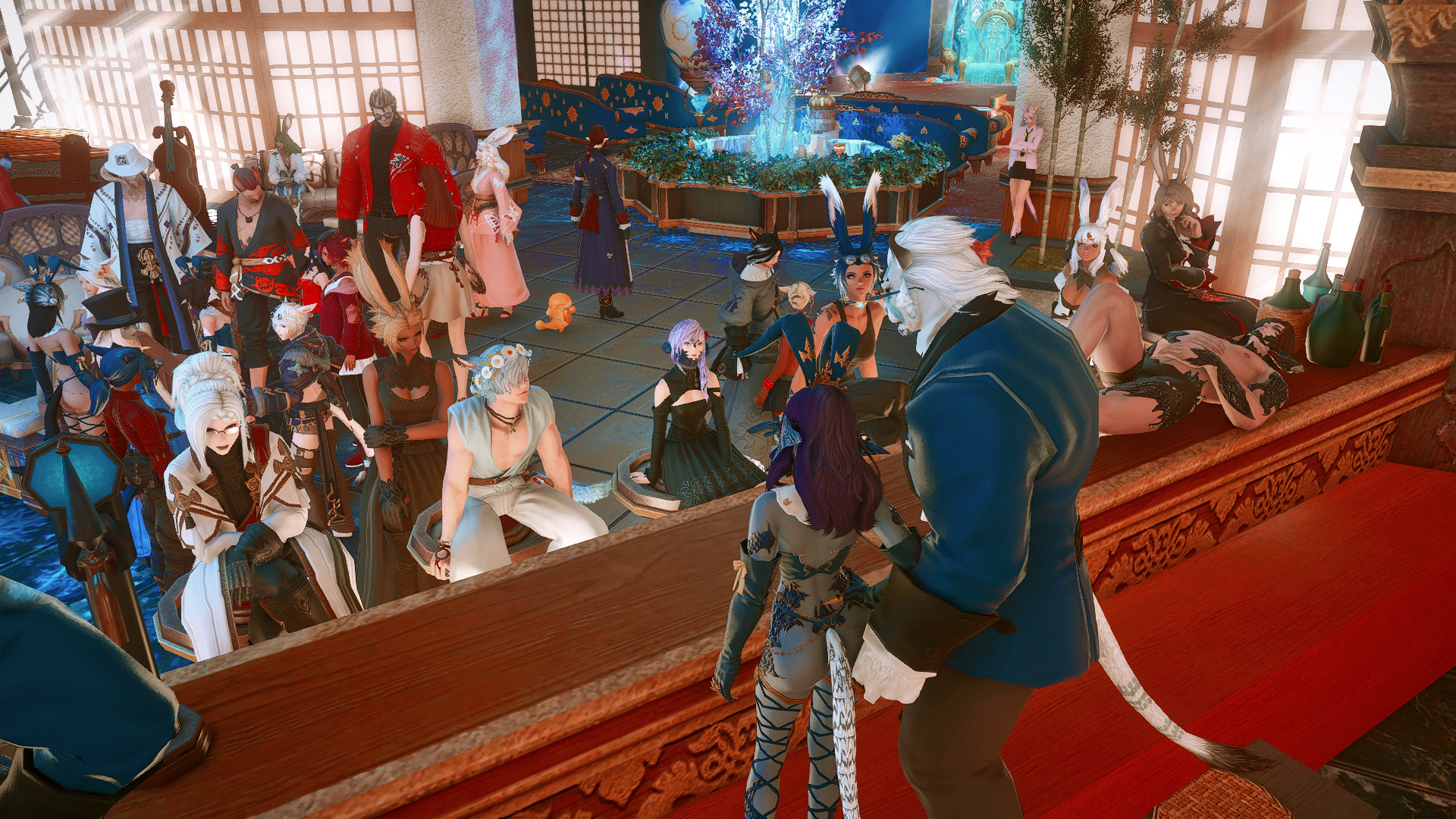 : Grape juice, lemonade, blackberry brandy, and lemon-lime soda in a sweet-tart fruity slush! Come and drink enough to get your slut on, all in honor of Amha’s Nameday!

: Vodka, lychee juice, and vermouth. Served in a cocktail glass with a lychee.

: Gin, maraschino liqueur, orange bitters, and fresh lemon juice. Served in a cocktail glass with a lemon twist and a maraschino cherry.

: A fruit punch so good it’ll kill ya! This bright red drink is fruity and doesn’t shy away from the liquor, with ice cubes in the shape of skulls floating in it.

: Vodka, rum, tequila, gin, triple sec, simple syrup, lemon juice, and soda combined together in a tall glass with ice. A refreshing drink sure to both cool you off and get you very drunk in a hurry, very popular with bathers down at the Brimming Heart.

: Orange juice, tequila, and blackberry brandy are poured carefully into a tall glass to make the colors of a beautiful sunset, then served with a cherry and orange slice.

: Citron Vodka, Blue Curacao, and Grenadine shaken and poured into a martini glass. Lemon lime soda to top it off. Blackberry on a pick and a lime wheel as garnishes. The signature drink of our very own stunning Vermilya Veronesi!

: This is a unique mead crafted by a consortium of delivery Moogles in their spare time, using honey and herbs gathered from various places all over the world, resulting in a rich and complex flavor that apparently pairs well with kupo nuts.

: An Ala Mhigan moonshine, this powerful liquor is made in secret in an undisclosed location, only available to purchase via a series of dead drops. It gets its name from the fact that the libation is distilled in equipment cobbled together from magitech machinery and engine parts stolen from the local Imperial forces. The ingredients used in the stuff is also stolen from the Imperials. J’rahku Nahyi claims that, during her period of forced conscription into the Legions, she helped steal and smuggle the distillery parts for the creators of Legionsbane.

: Captains’ Delight is a Hannish spiced rum developed by an alchemist out of Radz-at-Han in his spare time over the course of several years. While it is unclear as to whether this purpose has been actually met, the Thavnarian originally concocted this drink as a reward to Limsa Lominsan privateer captains for keeping the Thavnarian trade routes burgeoning with products that would have otherwise rotted in Imperial ownership.

: Shroud’s Bounty is a single malt whisky developed by an Ala Mhigan who moved to the Black Shroud to marry during the mid Fifth Astral Era. The drink is produced in limited quantities and aged in specially crafted casks, using a highly guarded secret recipe. Rumors state, however, that the secret to this whisky’s unique flavor is found in peat bogs.

: A powerful liquor made from plants found in Dravania, there has been an not-so-secret illicit trade of this stuff among the influential and wealthy of Ishgard for quite some time. This powerful spirit is said to have mild hallucinogenic properties, but due to the secretive nature of the consumption of this beverage, there is no concrete proof that Dragonsblood Absinthe does anything but metaphorically bash your brains in.

: A golden mezcal made from a Bela’dian recipe and a strain of agave plant originally spliced in the royal palace gardens of the aforementioned former kingdom, though now the plants grow all over Thanalan. Not to be confused with the knock-off rotgut, Fool’s Gold, a golden tequila of dubious quality.

: A strong tasting, blue tinted gin of Garlean make, this alcohol is made exclusively for officers in the Imperial legions, it is not sold on any public market. Civilians and foreigners in possession of this gin are considered guilty of the crime of stealing military supplies and are dealt with accordingly. Bottoms up!

: A kumis, that is to say a liquor made primarily from fermented mare’s milk, originating from the Azim Steppe. There is much debate as to who actually created this particular incarnation of kumis, between the Oronir and the Qestir. However as the latter has taken vows of silence, we may never know and the Oronir got to pick the name.

: An interesting concoction originally crafted centuries ago to celebrate the heroic Tenzen’s victory over the local deity Orochi. Keeping to theme, this is a rice wine in which a whole dead snake, preferably venomous, is placed, to infuse the alcohol with it’s essence.

: It is generally best practice not to ask what this powerful alcohol is made from. We’re pretty sure it isn’t actually blood and that the name comes from the color and viscosity of the liquid but just in case… at any rate, this is used by the beastmen for religious ceremonies so technically we’re committing sacrilege with every sip! In the end this is an almost unbearably spicy rotgut that leaves the drinker largely resistant to actual heat and fire for a long period of time, which is dangerous considering how drunk the person is going to be.

: A fine brandy out of Wineport make, the base wine used in the mixture is a fine Lohmani red, a favorite of one Merlwyb Bloefhiswyn, and this particular brew was made with her in mind back when she was the Captain of the League of Lost Bastards.

: A whisky made of millioncorn, harvested in Eastern Thanalan. This particular blend was named in commemoration of the capture of a cyclops to help train the fighters in Halatali before the Calamity.

: This vodka is from a distillery in Ilsabard, in a nation long since absorbed by the empire. Long enough that nobody remembers its original name. Likewise goes for this vodka, which the Imperials liked enough that they kept the distillery running, Savage Unknown is not the name this drink was born with. It is, however, of exquisite quality and is generally reserved for high ranking Imperial VIPs. It’s said it’s a capital crime to own this stuff.

: A thick, black beer made in the Imperial Homeland and formulated to last a long time in barrels so that it may be shipped to the far corners of the empire. The resulting brew has an almost whisky like taste that lingers on the tongue for a while.

: The quintessential signature beer of the city of Aleport, a sunny amber color and a taste that makes it easy to drink.

: This is a sort of answer to Aleport Original, it is a lager brewed by adventurers who sneak into Skull Valley and raid the wild growing wheat fields, headless of the angry dodos that now reside there. It has a crisper, lighter finish and is incredibly refreshing when served ice cold on a hot day.

: A rich and carmelly dark amber ale that is the signature beer of the Forgotten Knight pub in Ishgard.

: A draught of a rosey brown color brewed and barreled by Buscarron, the owner of Buscarron’s Druthers. It is made with specially roasted malts and has an almost sweet flavor, but any other details into the brewing process is a closely guarded secret.

: This strong tasting libation is brewed chiefly from faerie apples found in Nine Ivies. It is said that the original creator of the beverage was a retired archer belonging to the order for which the drink is named.

: A strong shochu that represents the marriage of East and West. It is brewed and bottled by the East Aldenard Trading Company in conjunction with local experts and uses a western export ingredient to set it apart from the pack; Dalamud popotoes. The resulting draught is named for the man who made this collaboration possible.

: This is a homemade plum wine made by an old Doman family of the same name. The imperial occupation saw a massive disruption in its production, making jars of the stuff a commodity, but it is said that there are still members of the family waiting until they are allowed to return to their traditions. It’s an old style recipe with the pickled plums still in the jar.

: The work of a Hingan sake master from centuries past, these two recipes have been brewed without change since the first bottles. Azaka is a sweet and unfiltered nigori sake and Kamidake is a drier junmai-ginjo. Both are considered absolutely exquisite and procuring a bottle for citizens of Hingashi is hard enough, to say nothing of foreigners who are looking for the brews. Serve these chilled or not at all, this stuff is way too good to give to a customer warm.

: These two lovely vintage Dalmascan red wines are on opposite ends of the tasting spectrum – the former sweet, the latter dry.

: Served hot or cold to your preference, you’ll get a single stoneware tokkuri that will keep your drink at your requested temperature.

: A crisp beer from Kugane, served cold and with a crisp, dry flavor.

: Served chilled to keep up it’s tart and refreshing flavor, this is lightly fruity and absolutely delicious against some of our hot meals and a wonderful palette cleanser.

: A strong drink made with shocho, this can be flavored to lemon, peach, or orange! Lightly sparkling and chilled, this is wonderful to sit and sip while looking over the lovely bunnies and studs of the Casino.

: The aromatic, rich astringent taste of matcha gives an alluring sweetness to this cocktail while being paired with a potent whiskey and lemon combination to bring out the best of the flavor of the whiskey.

: A rare and beautiful liquor called creme de violette pairs bewitching with the strength of sake and a bit of citrus to make something citrus and floral on the tongue.

: A platter of several pieces of delicate sashimi – salmon, white fish, tuna, and because we serve nothing less than the best, a bit of lobster! Served with a bit of fresh wasabi and ginger.

: Salmon, tuna, eel, and sweet potato with avocado – there’s a bit of everything on this single serving platter of delicately rolled sushi. Served with a bit of fresh wasabi and ginger.

: A bowl of warm, savory miso soup with soft tofu and supple wakame seaweed, nothing will warm you up faster — unless you pair it with some hot sake!

: A bowl of warm rice with two large slices of eel served on top, covered in delicious eel sauce – thick and salty, just like the Sevens likes it!